Below is just a sample of a few US Presidents who stars at their birth were observed forming geometric shapes that took them straight to the White House.  We will add more Presidents of past as we find them.  For now, let this work serve to illustrate how using the stars to make these parallels we are hopeful will support how they can trusted in cases of missing persons. 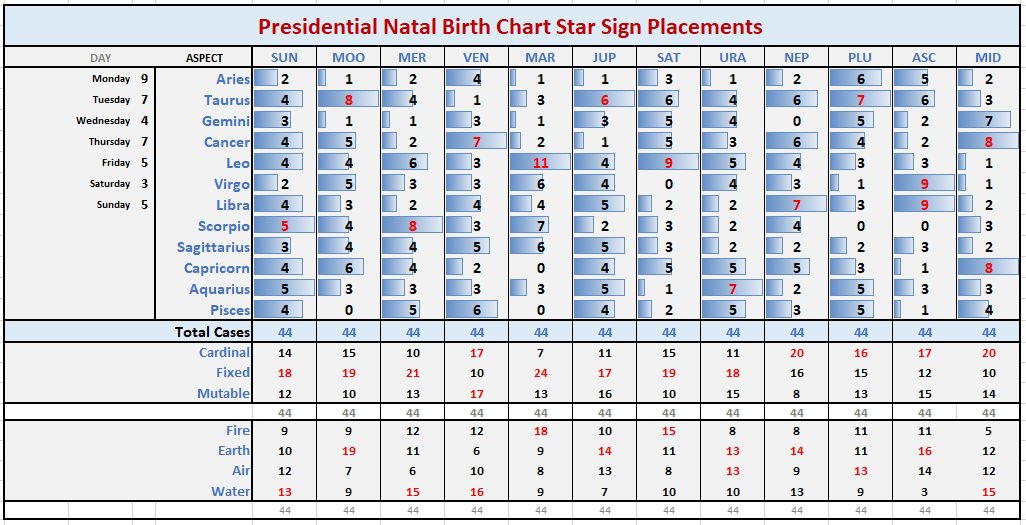 It is 210  Miles from the Jamaica Queens, New York to the White House. Trump's has a "fantastic" Sun/ Uranus conjunction in Triangle to an "amazing" Jupiter in Libra.  Keep in mind the its sign symbol is the scales of justice.  It's really a "terrific' aspect folks.  Really terrific.  Joking aside folks, Trumps' stars promise that he will not to be the "disaster" some of the Americans thinks he will be.
Trump was born destine for the White House just as the previous illustrated men here have been destine for the White House from the pattern of their Stars.  Here is how it works, for Trump.  He has, When you add these three together, they sum to 356. If you subtract 210 from 356, the remainder is 146. How perfect is that?  Mars' in Trumps chart measures 146° of total celestial longitude.  Do you wonder where his ego comes from well it swells in his Mars in Leo at 26°.   But its powers is increased because it rises at his Ascendant, where it follows along with his natal Pluto that already rose.  When you have Pluto sitting on your Ascendant you come into those world knowing you got what it take to get things done.  While it gets more help from Mars which is the planet in our charts that get us off our butts to go after what we desire.  Trumps Mars forms a Triangle to his Sagittarius Moon, which rules his 12th house of sorrows. Hence his self proposing statement that, "he doesn't 'lose'.  Its not in his stars to lose.

In the Matter of DIRECTION

The compass bearing from Jamaica Queens to the White House is 235° which is also expressed as 25° of Scorpio.  When you peek at Trumps' chart with a glance of the United States' chart, you quickly see there is no doubt that Trump loves America.  His affection and sincerity is written in his stars.  His own Venus / Saturn conjunction in Cancer conjoins tightly with the United States' own natal Mercury. When you remember that Trump has his own natal 22° Sun conjoined Uranus at 17° Gemini with its Trine to Jupiter form a Grand Trine to the United States Moon @ 18° Aquarius I suspect that he will gain the love from the other half of America who thought he would make a lousy President.

However, we can never escape our own natal Pluto.  For Washington, he had his Pluto in the air sign of Libra.  He died at home on the 14th of December, two days after becoming ill from spending the day outside in the elements on horseback tending to his plantation in snow, hail and freezing rain.  Washingtons' Pluto @ 17° Libra formed a Triangle to his Neptune @ 14° Gemini , the planet of mystery.  It remains today that Washington's cause of death is still a much debated subject.
In the Matter of DISTANCE
This Page is in Progress of adding more Presidents as we collect the data.